Our Expertise Insights Airline Economic Analysis 2018-2019
The rising demand for air travel globally has been encouraging airlines to focus on the need for new capacity and the potential to expand revenue and market share — even if such moves mean sacrificing margins and reducing yield.

This year’s Airline Economic Analysis reinforces our earlier findings that adding capacity at a pace faster than US economic growth has contributed to carriers’ eroding margins over the past several years and is likely to continue to do so until supply and demand is more aligned.

Based on current trends, the operating margin for US airlines is expected to narrow to between five and six percent in 2019 — a margin that is less than 40 percent of the industry’s peak of 15 percent in 2015. Ironically, this margin squeeze began during a period of falling oil and jet fuel prices: In January 2016, oil prices per barrel slid to around $35 from a high of more than $110 in 2014. Although prices quickly recovered to above $50, they have not returned to the $80-plus levels they had maintained between mid-2009 and October 2014. Still, the outlook is mixed, and the Energy Information Agency projects prices trending upward in the second half of the year. Jet fuel remains the industry’s second biggest operating expense.

US Airline Industry Margin and Oil Price Per Barrel 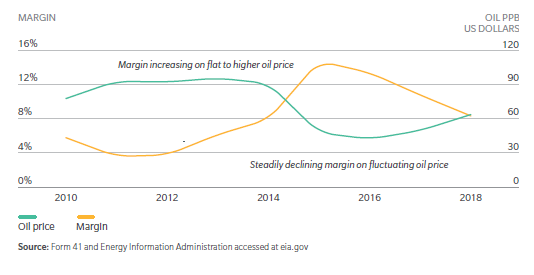 But the challenges facing airlines go beyond figuring out how to manage growth and stay profitable. Growth strategies also need to prioritize operational resiliency, especially as customers demand more service and reliability from airlines.

Beyond airline operations, the impact of capacity growth on an already severely constrained infrastructure — both in the air with overworked air traffic controllers and on the ground with overly congested airports — must be addressed. Additionally, the airline industry will likely contend with mounting pressure from governments and the public to reduce greenhouse gas emissions, even as available seat miles (ASMs) rise.

Finally, as the longest economic rebound on record runs out of steam after 10 years, the industry faces the prospect of sluggish economic growth of less than two percent annually in North America and Europe as well as slower expansion globally. While the US industry remained profitable in 2018, the prospect of slowing economic growth, mounting operating costs, and the increased pressures from ever-increasing capacity are likely to put airlines to the test moving forward.

In its tenth year, the 62-page report covers a range of aviation industry-specific economic and performance data as well as global capacity growth by region. This year spikes out special analyses on the profitability of the Pacific region and a more indepth fuel price analysis.  The report also includes discrete analyses on: